END_OF_DOCUMENT_TOKEN_TO_BE_REPLACED

My favorite game from Heroes of Might and Magic series is the second one. I guess it's mainly because of its graphics. I like these nicely done 2D sprites much more than renders of 3D models from HoMaM 3.

Today you can play original DOS version of  HoMaM 2 in DosBox. It wasn't the case few years ago when DosBox wasn't able to run SVGA games. There's also Windows version of HoMaM 2 executables in Heroes Of Might And Magic 2 Gold (expansion disk included). However, neither of these two options take advantage of today's high resolution monitors. Map view will always be stretched from it's original 640x480 resolution.

Several years ago, I stumbled upon Free Heroes II project. It's a GPL cross-platform (SDL based) implementation of Heroes of the Might and Magic II engine. It's been steadily progressing over the years and fortunately hasn't died like many other remakes of older games. Today, "standard game" mode is playable as well as hot seat multiplayer. Very nice feature of Free Heroes II is that map view is not stretched to higher resolutions. Instead, you can see larger portion of a map without the need for a lot of scrolling around. Let's hope we'll see version 1.0 in near future. 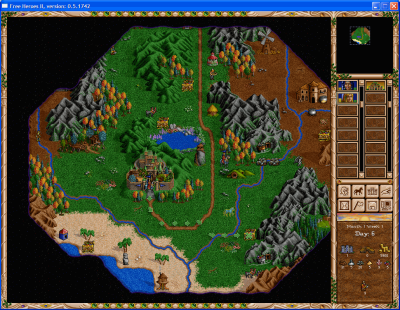 Another game I'd like to see remade is the first The Elder Scrolls game Arena. There hasn't been any known attempt at remake Arena - unlike its sequel Daggerfall (though all past remakes failed the latest one, DaggerXL, remains very promising). No description of Arena file formats is available on the Internet either (with few exceptions of raw images or formats shared by more Bethesda games) - again unlike Daggerfall where almost everything is described in detail.

I was pleasantly surprised few months ago when I found out about WinArena. It was originally Arena resource extractor and converter (textures, maps, sounds, sprites, ...) with 3D engine capable of  displaying Arena maps added later. Unfortunately there are only two versions you can find on the net and the latest is dated December 2005 - so it's long since dead.

3D engine uses software rendering in 256 color mode like original Arena (it supports higher resolutions though). According to the author, many of the effects in the game are based on palette manipulation tricks so it wouldn't be possible to get the exact Arena look using standard hardware accelerated 3D API like Direct3D or OpenGL.

What's best on WinArena is that full source code is provided. And since it handles most if not all Arena file formats, getting their description is just a matter of going through the code. I'd also love the possibility to revisit all the main maps in the game so maybe I'll modify it a little bit (WinArena currently starts at the beginning of actual Arena gameplay - in the prison like most TES games do). 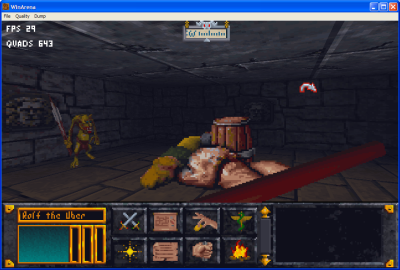 Just before publishing this post I also found Python port of Elder Scrolls: Arena which also seems inactive at the moment (there's some resource extraction Python code in the project's repository).

One of my all time favorite games was released as free download few weeks ago as a celebration of 15th anniversary of Elder Scrolls series. It’s 1996 title The Elder Scrolls: Daggerfall by Bethesda. You can get 150MiB zip archive with install at BethSoft's site. Getting it working on modern OS is not easy but DosBox should help here.

There were a lot of attempts at remakes of Daggerfall but all failed so far. However, a new promising one appeared recently and it’s progressing at warp speed since then (one month from wrongly textured entrance of Privateer’s Hold dungeon to rendering city blocks). Check out development blog and downloads at the homepage of DaggerXL. You need original Daggerfall data files to run the demo – no problem now when you can get it free.

I did my small share of dabbling in Daggerfall’s file formats too. Image and texture loaders in Object Pascal are part of ElderImagery extension of Imaging library and I’ve got BSA archive handler somewhere too. I’m now thinking of adding SKY format (backdrop images used in game for skies and far away mountains) loader, just for fun I guess.

When writing about Daggerfall, one cannot forget mentioning its music which was really excellent. Much more atmospheric and fitting than the music in recent Elder Scrolls games (there was also a lot more tracks). Check out Robert Hood’s arrangements of Eric Heberling's original music tracks.

UPDATE: Robert Hood's site has been dead for years but you can find his and many other great DF music remixes here: Daggerfall music.