Post to Post Links II error: No post found with slug "1048" was more about used libraries and Java. Now part 2 tells a story of transition from OpenGL to OpenGL ES for glSOAR terrain renderer.

Initially, I wanted to just use fixed pipeline because that's what desktop glSOAR uses (remember, original SOAR is from 2001). So that meant using GLES 1.0/1.1 since GLES 2.0 removed all the fixed pipeline stuff (matrix settings, lighting, immediate mode, and so on). To quote the official GLES docs:

Note: Be careful not to mix OpenGL ES 1.x API calls with OpenGL ES 2.0 methods! The two APIs are not interchangeable and trying to use them together only results in frustration and sadness.

I have to admit I didn't really check what features GLES actually has, somehow assuming that it would be on par with regular OpenGL (1.x core or some 2.0). Here's the list of few problems I encountered during the conversion:

Good listing of supported GLES extensions for different phone and tablet models can be found at GLBenchmark Results (select model and then look at GL config tab).

Some form of texture compression is supported by nearly all (if not all) current mobile GPUs. On desktop, it's easy now and has been for many years. We have S3TC/DXTC (supported by GPUs for ages), its variant ATI 3Dc (uses alpha channel coding scheme from DXT5, supported by all DirectX 10 GPUs and older too), and recent addition BC6/BC7 formats by DirectX 11 class GPUs.

Unfortunately, it is not so easy in GLES and mobile GPU world. The problem is that each vendor can support completely different compressed formats. Only certainty is that GLES 2.0 capable GPU supports ETC1 (Ericsson TC) compression (no alpha channel). As far as Android is concerned, ~90% devices have GLES 2 GPU (as of Oct 2012). Additionally, S3TC is supported by Nvidia Tegra, PVRTC by PowerVR, ATI-TC/ATC by Andreno.

New ETC2 compression looks interesting though. It is part of the core of new OpenGL 4.3 as well as GLES 3.0. On desktop, it should be available for all DirectX 11 class GPUs (when the drivers arrive). The quality is supposedly better than S3TC and it has none of its patenting issues.

Anyway, for new glSOAR it looks like ETC1 for Android target and S3TC for desktop. Most probably in KTX (Khronos Texture).So that means writing KTX loader in Java and probably some ETC1 and KTX stuff for Vampyre Imaging Library too.

Some tools: etcpack tool from Ericsson for ETC1/ETC2 compression (outputs KTX files), etc1tool for ETC1 is part of Android SDK, and ATI Compressonator can compress ETC1, S3TC/DXTC, 3Dc, and ATI-TC.

Current Status and Near Future

Now I have just a grid terrain rendering with no LOD done. Some parts of the SOAR code are translated to Java already. I'm quite worried about the SOAR LOD performace on Android though. Firstly, index buffer is rebuilt each frame (and can be quite big) and secondly, mesh refinement uses a lot of floating point calculations. Also the memory limit for Android apps is quite low for larger terrains (20 bytes are needed per vertex for SOAR plus a lot of 4-byte indices).

Well, if it is unusably slow, I can always abandon SOAR and do a Geomipmapping demo instead (that's the plan for later anyway :)). 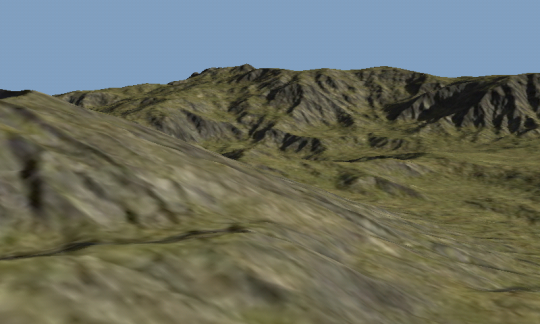 1 thought on “Porting glSOAR to Android and OpenGL ES, Part 2”