Just a few days ago I've stumbled upon new attempt at bringing Daggerfall back to life. Ruins of Hill Deep is a total conversion mod (like quite a few for Morrowind and Oblivion). Author of the RoHD is Interkarma, well known person in Daggerfall fan community. He wrote quite a few tools for Daggerfall over the years and the new 3D engine is based on their code base. Well, good luck with the project and hopefully we'll finally see some Daggerfall action again soon.

Another remake currently in works is DaggerXL (mentioned in Daggerfall for Free!). Unfortunately, after a really promising start its development slowed down so let's hope it will pick up the pace again (the author is currently merging several of his engines for remakes, like Dark Forces and Blood, into one shared engine).

Last but not least, Daggerfall turned 15 this August. So let's watch this official trailer:

Or a guy with shotgun wreaking havoc among Daggerfall's popular town guards:

I tried running TES: Arena on Android phone recently. There's a free DOSBox port for Android called aDOSBox. On my Nexus S (1Ghz ARM CPU) aDOSBox runs Arena at about 1 FPS. So it is far from playable speed but new phones could get usable frame rates maybe in a year or two (on Galaxy S II it's already noticeably faster). Main problem is controlling the game since there are nearly no usable buttons/keys on the phone. Also Arena is quite "mouse heavy" as you need to move the mouse holding the right button to swing your weapon.

Apart from free a DOSBox, there is also paid AnDOSBox that is supposed to be faster. See this youtube video of Daggerfall running on HTC Desire (1GHz CPU as well) which seems to be faster than Arena in aDOSBox (confused by the similar name? They also have nearly identical icon!).  Do you know any other alternative for running Arena on smart phones? 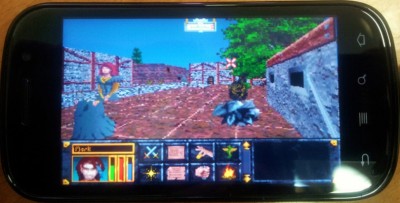 Some city in Tamriel

New tool for extracting and converting Arena files appeared on UESP site last year. It's command line utility based on WinArena (mentioned in post HoMaM 2 and Arena remakes). You can get the source code in C at UESP Arena-Files.

I've been thinking about creating some GUI for Arena files browsing and extraction. Daggerfall has great tools created by community for fiddling with its assets but Arena not so much. File format decoding would have to be based on WinArena too, as it's the known only tool (and stuff based on it) that can read more than just some textures or extract file archives. No file format documentation can be found on the net either (though there's lot of info for Daggerfall formats). So WinArena's code is basically the only documentation/reference available.

And finally, the official Arena trailer:

6 thoughts on “Arena and Daggerfall Findings 2011”